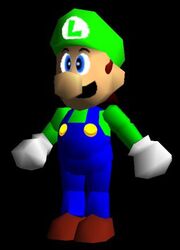 'L is Real 2401' is a theory / Easter egg in Super Mario 64. It involves the character Luigi and his absence from the game. This led to a lot of theories and bogus cheat codes about its non-existent aspect.

Super Mario 64 was originally going to be a 2-player game, with Mario and Luigi as playable characters. But the system's capabilities at the time prevented that from happening, and Luigi was taken out of the game. Luigi did, however, finally make his Nintendo 64 debut in Mario Kart 64.

In Super Mario 64's Castle Courtyard, there is a statue in the heart of the courtyard. The statue depicts a giant star with a blurry inscription beneath it. Although it is hard to read, the text on the inscription can be interpreted as either 'Eternal Star' or 'L is real 2401', depending on the player's viewing angle. While 'Eternal Star' made much more sense considering the star directly above the inscription, people quickly latched onto the 'L is real' idea. People thought that L stood for Luigi, and therefore Luigi would have been in the game. One theory was that 2401 represented every gold coin in each world of the game and that by collecting them all, the player would have to come back to the statue where Luigi would then emerge as a playable character.

IGN responded to the number of questions about Luigi by offering a $100 bounty to prove that Luigi was not in the game.

On 25 July 2020, 24 years and 1 month after the release of the game which means 2401 (665-667), the source code was leaked which includes an unedited model of Luigi confirming its existence, thus completing the prophecy.

In 2020, many bits of information about Nintendo's consoles, beta Pokémon data and source codes were leaked. Along those discoveries, there were some n64 and SNES source codes, which includes SM64 data. In that source code, a model, sprites and sound effects of Luigi were present. The SM64 community slowly restored the Luigi model back into the final game. Luigi was discovered after (almost) exactly 24 years and 01 month after the SM64 official release. Ironic isn’t it?

Community content is available under CC-BY-SA unless otherwise noted.
Advertisement